all original writing copyrighted, 2016, by Trust Your Perceptions

Male writers report the evolution of concealed estrus – females not signaling males – as the dawn of total female sexual openness to males. – But they would.

Males’ abducting/raping/keeping females captive likely originated after females stopped signaling. It’s unclear when males’ abducting/raping/keeping females captive was transformed by dudes worldwide into the Holiness of Matrimony, the Sanctity of Marriage, – but as recently as AD 200 in Northern Europe, for example, dudes still hadn’t fully made “the transition:” “Among the Germanic Goths, a man married a woman from within his own community. When women were in short supply, he captured (sic) his bride-to-be from a neighboring village. The future bridegroom, accompanied by a male companion, seized any young girl who had strayed from the safety of her parental home (sic). Our custom of a best man is a relic of that two-man, strong-armed tactic; for such an important task, only the best man would do (sic). From this practice of abduction, which literally swept a bride off her feet (sic), also sprang the later symbolic act of carrying the bride over the threshold…Since there remained the real threat (sic) of the bride’s family’s attempting to forcibly gain her return, the best man stayed by the groom’s side…alert and armed.” (Panati)

Males responded to concealed estrus by “improving” their sem-chems while institutionalizing “the keeping of females” to continuously fuck them – whether ovulating or not. Keeping females to continuously fuck them not only overruled the NO of concealed estrus, but, one-upping non-signaling females, maximized for Y-cloning. A female held captive and continuously fucked was highly likely to Y-clone her captor. Evolving their sem-chems on captive host-bodies, males overcame females’ no info/no interest new terms and conditions, easily embedding their sperm, parasite-like, into ripe eggs, ensuring their hosts continued to make them. All this served parasitic Y-chromosomes well – very well – for a very very long time.

Females around the world may have periodically appealed to males for fewer personal restrictions under captivity. But these appeals, even if successful, amounted to very little in terms of hitting dudes where it counts. Women who won the right to vote in the US/India/Saudi Arabia, for example, were still held bodily captive by males. By legal right, males still owned almost all female bodies on which they could evolve their semen and remake themselves through continuous spermatic injections. In other words, nothing changed that mattered.

It wasn’t until the Second Wave of the Women’s Movement that a significant number of women started to hit dudes where it counts. Assorted feminist challenges, – from birth control and abortion to Women’s Liberation and Lesbian Nation, – posed probably the greatest biological threat to males since the evolution of concealed estrus. 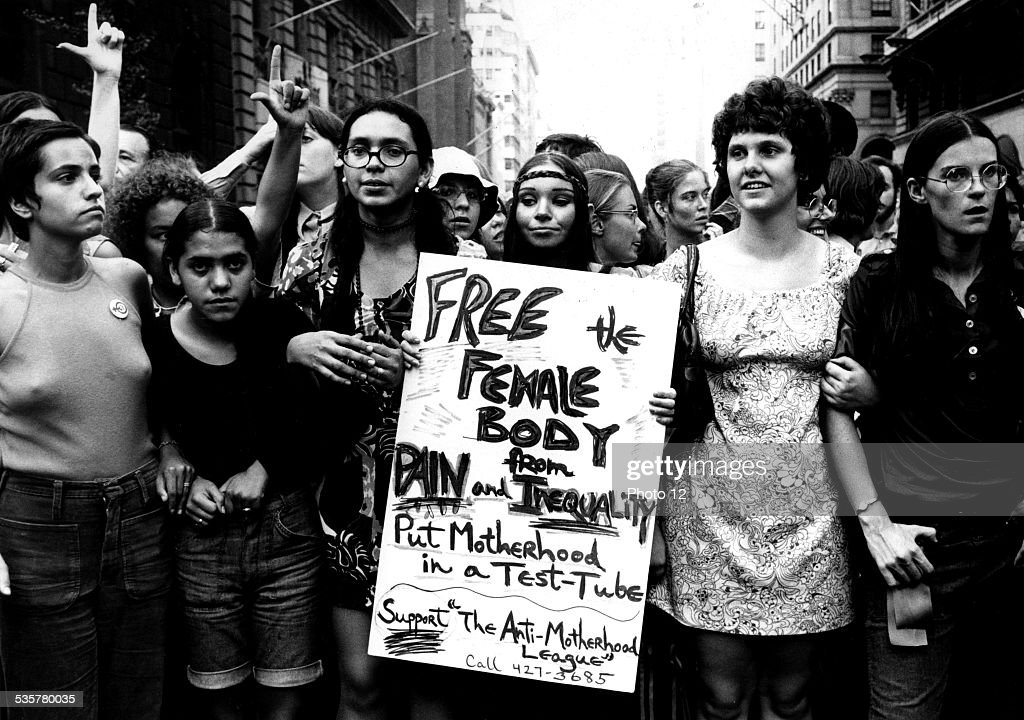 Women’s Liberation and Lesbian Nation, starting in 1967, were historically unprecedented and radically shattering by questioning and/or straight-out refusing male access to female host-bodies. The right not to have children/the right not to marry men/the right not to be sexual with men at all/the right to be a Freewoman and/or out Lesbian are often overlooked in historical accounts of the Second Wave, which emphasize job gains, yet in the history of men and women on Earth, freedom from males, was, for females, one serious goddamn fucking triumph. Due to Second Wave women who made it their right to live openly man-free, in many parts of the world, new generations of women show little interest in signing til-death-do-we-part blood-pacts with dudes.

And so across the spectrum – from the dullest hetwoman using birth control pills to the sharpest Lesbian Separatist honing her labrys, – male ejaculate was suddenly dead-idling on the interstate, – gridlocked. Finally females hit males where it counts. Males have correctly interpreted these collective barricades as a major biological threat. Males ejaculating on female’s faces and bodies is also new and biologically strange, yet is not without male precedent in other species – ie, once males have evolved their semen to bypass the vaginal tract or pass through female skin. (See Maleness in Context: cross-species sperm-transfer-tactics reveals what maleness is). Besides their obvious hate joy, one has to wonder why men are doing this at this time. Females as pores? As one million holes? Males appear to be chemically experimenting on females in strange and desperate ways.

Another new experiment heterosexual males are trying is sexual mimicry, used by males of other species, but heretofore, not ours. In other species, sexual mimicry is the male tactic of mimicking females, males disguising themselves as females to access females to rape. (Male biologists also call this “copulation sneaking.” – But they would). Sexual mimicry is an old strategy, a successful strategy, and not uncommon in males of very different species, – now apparently including Homo sapiens, toying with their pervs.

Dudegoo is now facing not just the external threats posed by female host-bodies these past few decades, but as sperm counts plummet and the Y-chromosomes in sperm slowly unravel over time, also the threat of internal decay. Given this dire situation, of course males would try every semonic strategy imaginable. The cells which make up semen are thought by male scientists to be the most rapidly-evolving cells in the human genome. If this is true, and it seems possible, it would be expected that semen, which acts as the armed-to-the teeth elite special forces guarding increasingly fragile sperm, is evolutionarily experimenting, – furiously compensating for internal decay, while at the same time, trying to better manage host-bodies in order to assure male perpetuation.

Clearly, this is the realm of seminal sorcery. Stepping back, we see these are spells men cast on women – spells men cast on women at every level – the microlevel, the macrolevel – and the supralevel, – ie, the level of women’s collective unconscious. Males are constantly administering and “upgrading” women’s collective unconscious, so that each successive generation of women will find it harder to scrub their minds of what the sado-sorcerers put there. Women can now chase their dreams, but women’s collective unconscious remains under male management. (Yet it can be done: Over time, with persistence and self-forgiveness, one can scrub one’s mind of what the sado-sorcerers put there). Feminism splintered in the 1980s because so many women hit a wall, finding it damn-near impossible to eradicate the man-sown masosadism/sm which had deeply and stubbornly rooted in their minds, and were instead now content to attend to their goals, to star in their own lives, feeling they had bargained well-enough, with many even enthusiastically choosing to cultivate the masosadism/sm they could not eradicate, even denouncing women who either never took that synaptic path, or who, abandoning old synaptic pathways, cleared new ones swinging their labrys. Naturally, men used this break between women to further hellify women’s collective unconscious, with special attention paid to Lesbians – whose collective unconscious the sado-sorcerers were particularly interested in keeping under male management. Then as now, women disagreed over whether or not to concede women’s collective unconscious to men, with many women decidedly spellbound, – women, who, because they could not fight male mind, fought other women for “the right” to keep male mind.

D. H. Lawrence: “Into her he poured all his pent-up darkness and corrosive death, and he was whole again… And she, subject, received him as a vessel filled with his bitter potion of death.” Men dump into women – guilt, shame, hatred which becomes self-hatred, bitter potions of death – all manner of toxins. Men discharge into women sub-lethality itself. Women are disabled from these sub-lethal discharges. Yes: Women are disabled from these sub-lethal discharges. How can, for example, a raped woman, the victim of a crime, be overcome with guilt and shame, and the rapist feel none? How can females at large, who after all, originated Life, feel so completely incapable? Men become agitated sitting in their own pot of toxins as it reaches a boil, complaining of getting “backed up.” Men discharge their disabling toxins into women, seminally and otherwise, – polluting women, transforming women’s collective unconscious into men’s toxic waste dump. The supralevel – women’s collective unconscious – oughtta be declared a Superfund site.

If we look at males, we can see they have placed their sperm bets across the board. “Risk-adverse” males, conservative males, still use what biologists call “mate-guarding,” – acting as a life-sized lifelong breathing burping sperm-plug, insuring that dude’s copy-orders and only dude’s copy-orders get copied. Other males, liberal males, enjoy taking more risk in the hope of higher rewards, ie, trying new ways to transmit their sperm/themselves while simultaneously trying to increase their returns by sperming more females. Yet other males, males who take the highest-risk, high-risk at the level of junk bonds (which commonly default, but if they don’t, can bring the highest returns), are the heterosexual males who attempt sexual mimicry itself.

Males appear to be “politically divided” over their sperm investment strategies, holding different opinions on the best way get their sperm into females. Aiming for good Y-returns, having placed their sperm bets across the board, males have in fact diversified their risk. Looking at males as a whole, we can see that males’ diversified sperm investment portfolio actually fully covers males, insuring they’ll be perpetuated – whatever the eventuality.

Of course there is only one unforeseen problem with males’ diversified sperm investment portfolio – and that is the declining value of sperm. As sperm counts drop and the Y-chromosomes in sperm degrade into oblivion, dude currency will be worthless. Still, dudes will keep trying to reinvest/reinvent/remake themselves. – Being, after all, one inherently narcissistic chromosome.